Women’s Humane Society was the very first animal shelter in the United States, founded in 1869, by a woman named Caroline Earle White, who was a pioneer and trailblazer in animal welfare. The whole idea of adopting an animal didn’t exist in 1869 so Caroline played an integral part in forming the first woman’s branch of the SPCA in Pennsylvania. In those times, women weren’t allowed to hold a position of the SPCA, or be on the board, which is why they’re called Women’s Humane Society.

Mandy Dollar, with Women’s Humane Society explains “This was the 1800s, so, animal welfare, and humane treatment of animals wasn’t even in the realm of thought. People treated horses like cars; they took your belongings from one place to another. There were no laws put into place that animals should have water, food, shelter and basic needs that we would think of today as so obvious. The Women’s Humane, the SPCA and the PSPCA were all advocates of humane treatment of animals and for laws to be put into place. Some of those laws were to make sure that weight restrictions were put on horse buggies so that horses weren’t buckling under the pressure.”

When Caroline E. White was given the opportunity to form her own branch, she really wanted to take it to the next level. She had been observing all the homeless animals around and she really wanted a place where she could rehome and reunite these animals with their owners. She formed the Women’s Humane Society to become a shelter and adoption center, as well as a clinic for people. Women’s Humane Society has been running strong for 146 years and still practices these virtues, with a few additions such as the Women’s Adoption Center, the Caroline Earle White Veterinary Hospital, as well as an open access shelter; open access means they do not turn any domestic animal away no matter what. 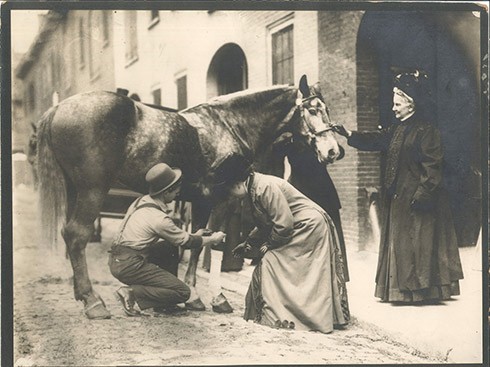 Mandy Dollar explains “We really depend on our community to provide us with donations whether it’s monetary or non-monetary, and that’s what keeps us going, that’s what keeps us able to continue helping these animals and people in our community.”  Women’s Humane Society put on a Kuranda Dog Bed Drive in March of 2015 for 5 days and received 10 beds during that time and about 20 beds since then. Mandy says “The really nice thing about the drive is that since the drive, more beds have been slowly trickling in as we have Kuranda Dog Beds at the top of our “wish list”. The beds themselves are safe, durable, and easy to assemble, they’re very sanitary they’re very comfortable, and they increase the quality of life for our animals while they’re in our care. Not only that, but they have replaceable parts. With other beds, if a part breaks off or something happens, we have to replace the whole bed, but with Kuranda beds, we can simply replace that part with very minimal cost. This is a huge plus for us, because whatever money we save, we can then put it back into the animals and their care.”

Mandy Dollar also says “It’s crazy; you wouldn’t think that a dog bed could make that big of a difference, but for these animals, it really does. These beds provide a place where the animals can find comfort in a stressful environment.”