Dennis Blocker has spent years training and working with War Dogs and Police Dogs. On December 1st, 2019 he wrote and published a book about his time with these amazing dogs. The book is entitled, The Dogs I've Known In 2 Wars.
His book is now in ten countries and in every State of the United States with the exception of Iowa, Nebraska, Montana, and North Dakota. He is trying hard to reach those States so he'll have the satisfaction of knowing his War Hero Dogs are in every state of our Good Old USA.
If you know of anyone in those States, please reach out to them and invite them to visit Dennis' website http://dogsof2wars.com 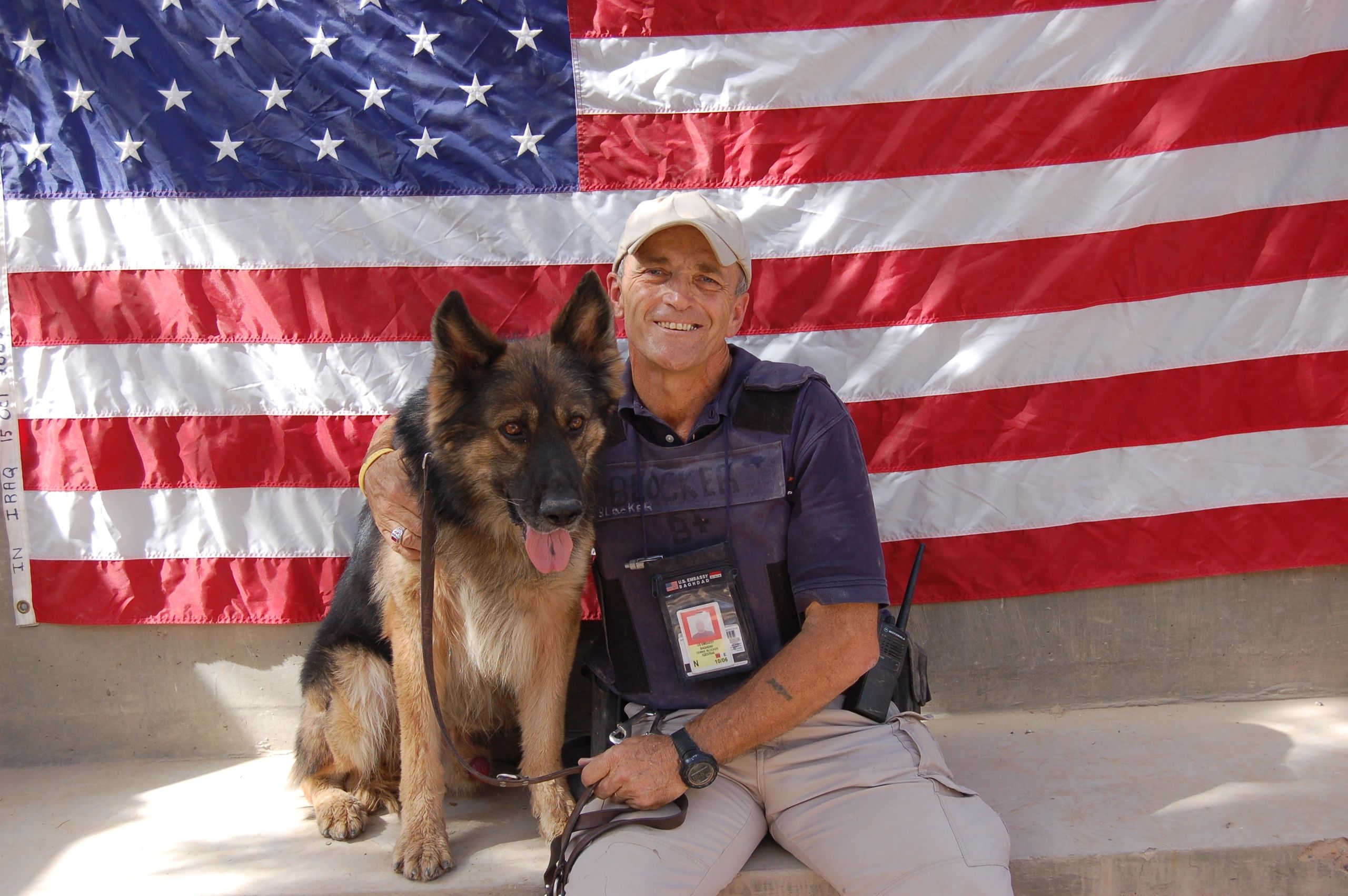 BK: Tell me about your military background and your years of service.

DB:I was in the Police business with the Air Force for 21 years.

BK:How did you first get started as a dog trainer? Was it before your military career or because of it?

DB:I became a Dog Trainer 14 years after I retired from the Air Force [because of my] love for dogs, especially “Working Breed Dogs” German Shepherds, Belgium Malinois, and Labs.

BK:What is the relationship like with your dogs when you are working together? Is it always kept professional? Do you get to live together or do the dogs all live together in kennels?

DB:The working relationship between you and your dog is always at a professional level, meaning strict obedience - obedience is the foundation to everything the dog will do in its time of service in his or her life. Meaning this: when you are working with your dog either in training or a real world situation, you cannot allow your dog to run off and sniff flowers or chase a stray cat or dog. You has the handler or trainer must be able to see your dog's change of behavior (change in body language) and immediately correct this. With no correction, the dog is realizing it can get away with doing things out of the structured life it has been trained to follow.

NOTE: I’d get after some of my K9 Handlers and tell them this, “I’ve been noticing that you ALWAYS have your Dog in Obedience - ALWAYS. In time this is going to be a negative for you as the handler, your dog is NEVER allowed to just be a dog because you’ve ALWAYS got him or her in obedience. This will, in time, affect your dogs mind, it will either become aggressive towards you, or it will start to shut down and NOT want to work. You’ve got to allow your dog time to just be a dog. Play ball with it, run with it, chase it around, roll on the ground with it, let your dog have fun! It’s critical to his or her well being in the long run!”

DB:In Iraq the war dogs lived in their individual cement kennels. In Afghanistan half of our dogs lived in kennels and the other half lived in the room with their K9 handler. When someone would come to their room, they of course would have to put their dog up into the dog crate in the room for the safety of the visitor.
The reason for this split was because we were protecting two areas of our base and the kennels were too far away from the one area to have to transport every time there was a shift change.

BK:Are these dogs bred specifically to be military working dogs or is it a process to discover the dogs who would excel in the field?

DB:Many of the dogs are purchased from overseas vendors, and some stateside vendors as well. These vendors know exactly what the military or civilian contractors are looking for in “working dogs”, and what breeds they are desiring. Mainly the Belgium Malinois, German Shepherds, Dutch Shepherds, and Labs. These vendors are well aware that we are looking for a dog who has “high ball drive” and, “high hunt drive,” meaning this: ball drive. That dog, when you throw that ball or Kong into a woods, he or she will dive through thick underbrush, claw its way through the thick brush just to get that ball or Kong toy. Hunt, meaning it will use it's nose to hunt for the smell of that toy ball or Kong on the grass. That toy is displacing the smell from your skin cells from the ball or Kong to the grass or dirt, the ball or Kong is also displacing the smell of the rubber from that ball or Kong toy but that dog will NOT quit looking for this toy with his or her nose. This is the type of dog we are looking for.

NOTE:Not all of the dogs who are purchased to be trained make it through training. If we need 20 dogs to be trained, 25 will be purchased knowing that maybe five of these 20 will not cut the training process.

BK:How old are the dogs when they first begin their training?

DB:The average age is between 18 months to two years of age. Any younger than that and they want to play with butterflies or smell flowers as your trying to train them. At such a young age they get distracted very easily. The USAF is trying out a program for the last few years in trying to breed their own, rather than buying from overseas all the time and trying to start training them at a much younger age. The Air Force here at Lackland AFB in San Antonio, Texas will allow locals to “foster” a puppy - take it home, get it use to life in a house, get the puppy out and around in the community and build on its social skills, introducing the puppy to every type of environment it can be introduced to. At seven months of age, the puppy is returned to Lackland AFB to begin Dog training.

BK:When do you get involved with them? Right from the beginning or after they have gone through some basic training?

DB:I would train a dog(s) right from the very start. They come over from overseas then they go into ten days of quarantine. Once they have finished quarantine I would take my ten dogs to be trained and start to build a bond with each of them, which is critical. I’d play ball with each of them, take them for a nice long walk, just allowing them to be a dog and sniff the ground, mark with it’s urine where other dogs have marked, talk to the dog (high tone happy voice tones) (low tones are used only for corrections). After a week of bonding, then I’d start with basic obedience, then move into the introduction of explosives or drug imprinting odors in our Lab training areas. Then start to build on that, then move forward into teaching the dog to properly search vehicles, fields, roads, packages, suit cases, buildings, aircraft. Then certification day where they will each be tested in all of these ares to find either explosives or drugs. This can take from 6-8 weeks of constant training with each.

BK:What was the typical day like when you were deployed?

DB:Our days started at around 0500 hrs in the morning, getting dogs up off from their Kuranda Dog Beds, getting them out to give them a “potty break” then place them into their portable dog crates on our trailer, clean out with a water hose their kennel floor, walls, water bucket and spray down their Kuranda Dog Bed, then hang it up on the wall to air dry for the day so all would be ready once we returned. We’d then head out to our “checkpoint” which was in the “red zone” - it was very dangerous being outside the “green zone.” We’d then search vehicles for explosives, car bombs, truck bombs for 8-12-15 hours a day with temps in the summer running from 110-125 degrees Fahrenheit. Searching from 800-1,200 vehicles per day with rockets coming in around us, along with mortars, suicide bombers blowing their cars up near our checkpoints, being shot at by either “bad snipers” (thank God they were bad shots) or we’d be ducking from bullets which were just stray bullets. The insurgents would stand off on the other side of the Tigris River, point their AK-47 Rifles up towards the sky and let loose with a full clip of 7.62mm Nato Rounds - they were hoping one of their rounds would hit one of us or do damage to equipment or wear us down, which the latter did NOT Work - K9 is too tough to be worn down!

BK:Have you ever lost a dog in action?

DB:I’ve never lost a dog in action. I’ve had friends in the wars who have, however.

BK:In other interviews, you have said you needed to write this book because “it’s bothered me that nobody knows about them”- when was the moment that you decided to write the book that would tell their story? Was there some kind of catalyst that brought you to the decision or is it something you always knew you wanted to do?

DB:I knew back in 2005 when I was in Iraq that one day I wanted to write a book of our American War Dogs, I just did not know when it would take place. It did not take place until after my return from the mountains of Afghanistan in 2011. It was in June of 2011 when I sat down and started writing my thoughts down on paper, stories after stories started to flow from my heart. I wrote these stories for the next eight years. In that last year, I asked my son Dennis II, if he’d assist me in getting my book finished in the year of 2019, I asked him of this in Dec 2018, he said, "sure thing Pops!” So, we stayed the course, kept ourselves very disciplined to work at the book with an goal to get it finished in a year. It was published on 1 December 2019. We did accomplish the goal we set for ourselves!

BK:What is something you want o tell everyone about the dogs of war, even if they don’t read the book?

DB:Every person in every state of our country and every person in every country which now has read our book, all say the very identical things of the book. “We felt like we were right there with you and your War Dogs. It was intense, I cried at times, I laughed at times. There were no “Blood and Guts” stories, no foul language, it’s a book written with compassion for the love of these War Dogs and their service to our country. This is the very best book I’ve ever read on the subject of War Dogs. I could NOT put the book down, I missed putting up my Christmas decorations, I spent the entire day reading, “The Dogs I’ve Known In 2 Wars.” I’ve learned so much about War Dogs after reading this book."

So, I guess what my response would be, is this, “It’s a shame you’ll miss out on all of these things spoken of about the book from just a few of the people who have since read the book, there are dozens and dozens more who I did not list their comments, there’s just NOT enough room.

You can purchase Dennis' book, The Dogs I've Known in 2 Wars, Book One : Iraq From his online store
http://dogsof2wars.com